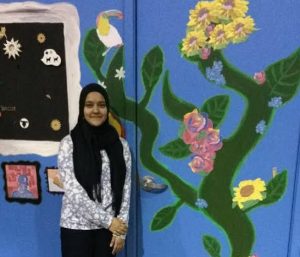 BCCP means not only Brooklyn College Community Partnership, but also a place that taught me a lot through the course of one year. At the start of this vibrant year, I came to BCCP in hopes of getting an internship, however I was told that there were not enough seats for everyone, therefore I was not chosen. During the second semester of this school year, I took community service as one of my classes, for which I volunteered at BCCP.

The class only required 60 hours of volunteer work in a non-profit organization. I couldn’t think of a better place than BCCP. After I completed my hours, I continued to come to BCCP, and then Jeremy Goren, the program manager, gave me news of an open spot for an internship. I happily accepted his offer and busied myself into completing the 90 hours required to finish the internship.

I came to Brooklyn College at 1:00, right after the bell rang which indicated that I was done with school for the day, and stayed till 6:00. During this process, I experienced many obstacles, because I got the internship in April. I had AP exams and a lot of tests because the second marking period was coming to an end on one hand, and the hours to catch up to on the other. However, I took time out to come to Brooklyn College not only because of the internship but also because of my friends who were part of this program and the staff, who I enjoyed spending time with.

Like everyone else, I also volunteered and kept count of my hours, but the difference was, I was volunteering for the program manager. My supervisor, Jeremy Goren, a very sophisticated and fun person to be around with, taught me a lot of new things. I learned how to enter the attendance online, how to pick out and analyze student work, and the list continues.I also used iMovie to edit videos that my group and I made for the Spring Art fest this year. For the Art fest, we recorded ourselves making samosas to present to all of Project Peace. We also used GarageBand to make music that we could play behind the video.

I really enjoyed working and being a part of BCCP. While working with Mr. Goren, I helped curate the Project Peace journal for 2016-2017, which I thought was very interesting since I’ve never done anything like that before.I hope I get the opportunity to do something like this again in the future. I also helped him set up exercises and gave out snacks.

In order for interns to still be part of the internship, interns have to come into BCCP as a student once a week, which was written on the student contract that we signed. I made sure I logged in only once a week and didn’t count the hours for the other day, so I wouldn’t be unfair to the other interns.

To complete 90 hours, I had to do 15 hours with Isabel Moros-Rigau, the program director at BCCP. With her, I worked on decorating the walls, cleaning the bookshelves, and looking after the middle schoolers. I also worked on the mural with some other interns. One thing I liked about BCCP was the homework time that we were given from 3 to 4 pm, but not all the students took advantage of that. I liked the idea of homework time because I lived far from Brooklyn College and I got home at around 7:10 on Tuesdays and Thursdays, which left me no time to do homework at home.

I am going to take forward a lot from BCCP in my life because this was my first volunteer and intern place. This was the first time I got the chance to interact with people who I had never seen before, people from different schools all gathered in one place. I had always been an antisocial person before I came to BCAL, but I can now see the difference. I talked to so many people I didn’t know and was in a totally different environment this year. I don’t look like the same girl that walked into BCAL in September, and I can see myself changing in the years ahead.